Gifted Balls, and a Date to Hold. 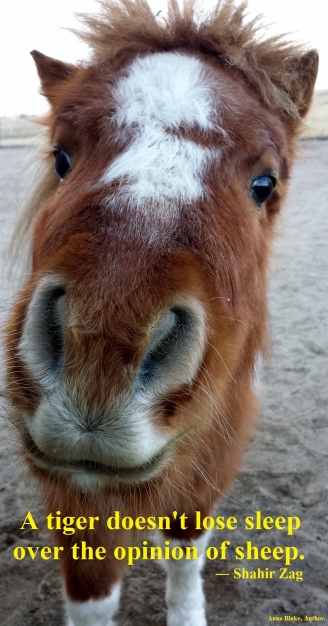 A few weeks ago, a woman called me for horse boarding information. She was looking for a place for a couple of minis. I explained that I only boarded horses who were in training with me. We talked about the challenge of minis–there is no sliding scale of care. They may be small but they need everything an imported warmblood needs, so quoting a price was tough. The caller knew minis; she had a equine-assisted therapy program and worked with disabled kids. She couldn’t take the minis in because they hadn’t been handled and were out of control, truth be told. It wouldn’t be safe to have them at her barn.

They weren’t her minis; they belonged to a woman she was trying to help and she knew they really needed training, not that the owner was willing to pay for either training or board, even though she had the money. That was the real problem.

It was a mess, but it wasn’t the caller’s mess. On a whim, I asked her if she considered saying no–that maybe this person was taking advantage of her kindness. The caller immediately agreed, saying the woman was always manipulative and against her better judgement, she couldn’t say no. She’d been feeling mad at herself but still calling around for hours. Then she apologized again.

Women. We are amazing creatures. We do the work of twenty non-profits before lunch.

I told her she didn’t need to apologize and congratulated her on her own important work; it wasn’t her job to be responsible for the irresponsible mini owner. She agreed that the owner was plenty capable of making calls. About that time the tone of the conversation changed to the extreme. She got cheerful. Being off the hook made her giggly. Then she blurted out something that the previous conversation didn’t prepare me for.

I laughed hard enough to spit. Her candor surprised me: talking about balls isn’t profanity, but it did take some to mention them. As for me, it was a skill I didn’t know I had. The tension broken, we laughed together like old friends but after she hung up, the thought remained… Why even use this weird word choice for confidence? Does male energy say no easier? I know they usually apologize less.

Then I daydreamed about my new superpower. To whom would I bestow balls? Would it be a ceremony with candles and dark robes and harp music? But that mental image got mixed up with a few too many colt castrations. You see the dilemma? An over-active time-traveling memory.

NEWS: Finally. Real. Progress. My book designer, Jane Dixon-Smith sent me files for the cover and interior design. Then I screwed up my courage and with the use of borrowed balls, I uploaded the book interior and cover to Ingram, largest book publisher on the planet. There were pages of money details, book descriptions, and general fussiness but when it came time for the monumental upload, it was anti-climactic. It took about a minute longer than putting a photo on Facebook. Hardly something to get clammy balls about, especially thirty-one months into the project.

Details will follow but there is still so much to do. I need to get author pages up at Amazon and Goodreads. I’m studying up on marketing, trying to pick the right keywords for Google, and I still have lists of to-do lists. This is a huge investment and I want to get it right.

But then sometimes the fourth wall breaks. It’s a theater term for that time in a movie or play when the lead character looks straight at you, breaking that suspension of disbelief we all wear to the movies, and directly addresses the audience. When it happens to me, and I want to self-consciously say, “Can you believe I’m actually doing this? How strange am I being? Because I’m working without a net here…”

But then I remember–one more time– that I have balls. You all gave them to me in these last months. If I sound remotely brave, it’s your balls talking.

Thank you, they’re serving me well, and if I can ever return the favor, just ask.

Latest book: Poems from the Prairie